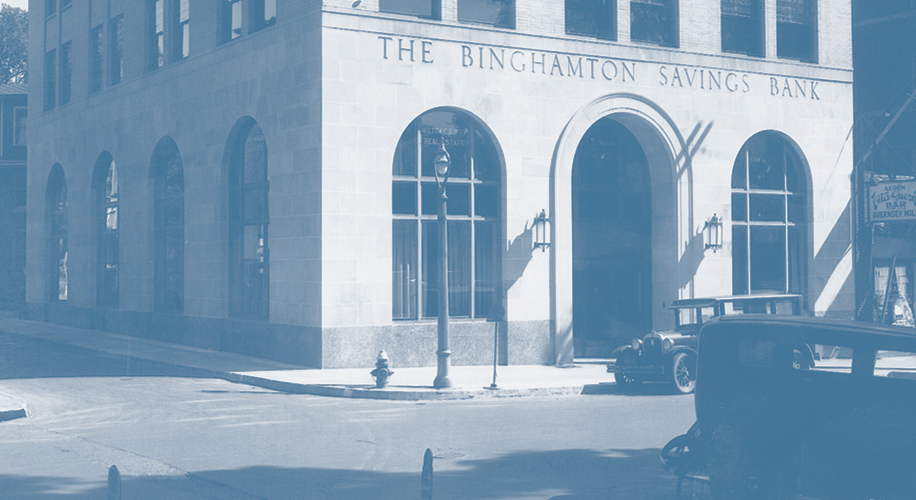 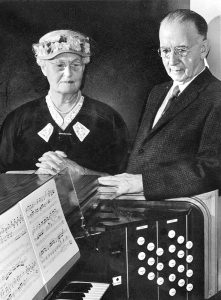 Conrad Klee was a shrewd businessman, a wise investor and a man with a generous spirit. Born in 1881 in Binghamton, he was the fifth of eight children. His father, also named Conrad Klee, came from Germany, and his mother, Margaret Culli, from Tioga County.

After graduating from Binghamton High School, young Conrad joined First National Bank in Binghamton in 1900, working first as a “runner,” and later as a note teller, cashier and manager. He married Virginia DeLavan, of Guilford, N.Y., in 1907.

Eventually, Conrad moved from banking to insurance. By 1920, he was The Travelers’ general agent in Binghamton, running his business from the third floor of the Binghamton Savings Bank building. Reportedly, he enjoyed an unusual arrangement that brought him commissions on all transactions for Travelers throughout the region – a lucrative agreement that lasted more than 40 years.

A friend of Thomas J. Watson Sr., the father of IBM, Conrad was an early investor in that company. Friendship also led him to back a new venture called Azon, based in Johnson City. Both investments paid off well, with earnings that helped fund the Klee Foundation after Conrad’s death.

While Conrad’s business acumen made him prosperous, he and Virginia never flaunted their wealth. Their home was not one of Binghamton’s showcase mansions, but a modest establishment on St. John Avenue. Their only real extravagance, a niece remembered, came on their annual trip to Florida, when Conrad spared no expense for the comfort of Virginia, who suffered from arthritis.

Conrad also used his wealth to help friends and relatives with generous gifts. “My Uncle Conrad annually helped my struggling parents in purchasing school clothes for both my brother and myself,” one nephew said.

The niece recalled quiet kindnesses toward many people. One was a gift to her husband and herself after they had suffered the loss of a young daughter. Slipping discreetly into the husband’s office, Conrad left an envelope containing a check. “He knew that our expenses were very high at that time,” she said.

Relatives weren’t the only people to receive gifts, large and small, from the Klees. When one young member of their church, Trinity Memorial, was preparing to leave the service, he expressed a wish to become a lawyer. Conrad and Virginia offered to pay his way through Albany Law School.

Robert (Bob) M. Best (now deceased), retired chairman and CEO of Security Mutual Life Insurance Co., recalled his first Rotary meeting, around 1950, when he nervously attempted to make conversation with Conrad. Best mentioned how much his wife loved the Currier & Ives calendars that Conrad’s business sent out each year. When Bob returned to his office after lunch, Conrad appeared at the door with a stack of those calendars for Bob’s wife.

Even the neighborhood children knew the Klees’ reputation: the house on St. John Avenue drew big crowds every Halloween. “Boy, oh, boy—did they give out the candy bars! No wonder their doorbell rang all night long,” their niece recalled. Virginia loved those evenings, but her disability kept her indoors. “Uncle Con made everyone come in and show their costumes to Virginia,” the niece said.

Like many wives of her day, Virginia considered it her primary role to support her husband. Formal and gracious in manner, she disapproved of drinking and smoking. Did she know that the family’s driver, Joe, kept a secret stash of cigars for Conrad in their car? Did she realize that Conrad, when behind the wheel himself, sometimes stepped on the gas and gleefully zoomed down the highway at speeds she would never have approved? Virginia must have known about his boyish streak of mischief, but her thoughts are lost to history.

History does, however, tell us how Conrad’s will continued the generosity of his lifetime. The Klees had no children of their own to inherit their money, but Conrad made more than 70 bequests – ranging from $1,000 to $5,000 – to family and friends. In addition, he created 21 lifetime trusts for family and friends, each ranging from 2 to 7 percent of his estate.

Conrad also continued his lifelong giving to organizations, making bequests to nearly 20 of them, ranging from $1,000 to $25,000. And, of course, he created a permanent legacy in the Conrad and Virginia Klee Foundation.